Inside NASCAR’s code words: ‘Filet-O-Fish,’ ‘lemon-lime’ and the art of in-race deception 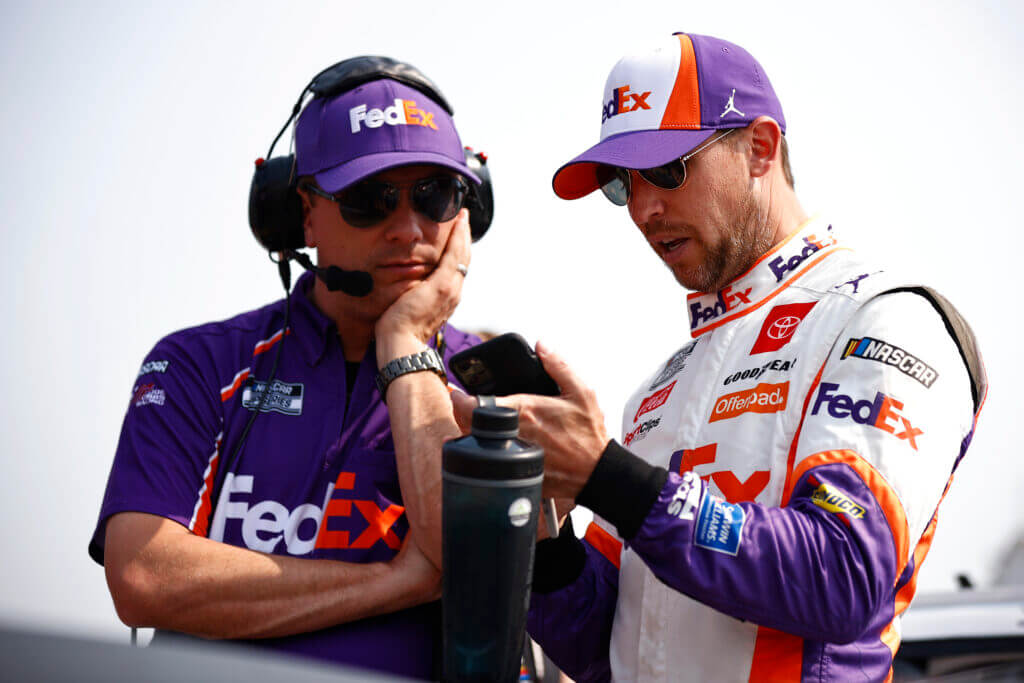 If you didn’t know better, you’d think Bubba Wallace’s team was ordering off a McDonald’s menu. You’d also be excused if you thought Denny Hamlin’s team was talking about the latest happenings with Major League Baseball teams.

But in both instances, the teams for Wallace and Hamlin were merely conveying strategy decisions to their respective drivers over the radio during a recent NASCAR Cup Series race at Michigan International Speedway. Instead of making it clear for anyone eavesdropping on their radio channel what they were planning, the teams used code words to mask their calls.

“It’s nuanced,” said Chris Gabehart, Hamlin’s crew chief. “It’s just nuanced stuff, trying to make sure you’re not giving anything away. … As the rules continue to tighten and the competition continues to get closer, there’s not one single part of the sport you don’t compete at. This is just one area. And if you can throw one guy off or tip the odds in your advantage, even a tenth of a percentage point, you have to try to do it.”

NASCAR teams using code words is by no means a new phenomenon, but the ease in which fans (and the media) can listen in on radio conversations during a race has put a spotlight on such transmissions and the creative vernacular teams employ.

Many teams, though not all, use code words in some form during a race. Typically, according to crew chiefs and competition directors The Athletic spoke to, this secret language pertains to one of five strategic decisions: right- or left-side tires, no tires, fuel only or not pitting.

“I can tell you from my point of view, there have been times where I was interested in what a competitor was doing but I wasn’t able to determine it because of the code words they used,” Gabehart said.

Employing code words is not an every-race thing for some teams. Its usage is dependent on the style of track NASCAR is competing at that week.

Tracks like Michigan, Daytona, Pocono and Talladega see more code words utilized because a crew chief has more options due to lack of tire wear. On high-tire-wear tracks like Atlanta, Darlington, Fontana, Homestead and Richmond, four-tire stops are prevalent, thereby reducing a crew chief’s options when their driver pits. And on road courses, code words are used more to convey whether a team will pit at the end of a stage or not in order to earn stage points. Drivers keep a list of the code words taped inside the car that they can reference.

Usually hot dogs are a great thing to think about … but not in this case. ?

It’s not uncommon for a team to use code words in the early and middle portions of a race, then change over to straightforward communication toward the end. The reasoning is that there are some instances where crew chiefs want other teams to know what strategy they’re applying — such as a late-race scenario where a crew chief whose driver is running near the front foregoes pitting and wants other teams to follow suit so that his driver then has buffers against those who had pitted for fresh tires.

“Most tracks it’s just not necessary.”

The responsibility for coming up with code words often falls on the crew chief or engineer. Words often are rotated during a race so that a rival team can’t decipher what a specific word represents; one competition director said his team keeps a list of five or six code words pertaining to a specific call, with each word checked off once it’s used.

Many teams choose words related to their primary sponsor for that race. Wallace’s No. 23 23XI Racing team went this route at Michigan, thus why nuggets, cheeseburger and Filet-O-Fish were used by the team as McDonald’s served as Wallace’s primary sponsor. Aric Almirola’s Smithfield Foods-sponsored team opts for words like ham, bacon, pork chop and hot dog. Other teams don’t always adhere to verbiage related to a sponsor. “Tigers” and “Cubs” were among the code words used by Gabehart at Michigan, though his No. 11 team was not sponsored by MLB.

“It’s all in the sponsor game, baby,” Barker said.

Camouflaging strategy decisions can occasionally backfire due to miscommunication.

During a 2019 Xfinity Series race at Michigan, Christopher Bell and Cole Custer were running first and second when Bell’s crew chief, Jason Ratcliff, wanted his driver to pit. Except the code word Ratlciff said, which referenced Gatorade flavors, called for the opposite strategy, so Bell stayed out. So too did Custer, who had been instructed by his team to do whatever Bell did.

Tyler Reddick did pit, and when the rest of the race went caution-free he gained a significant advantage after Bell and Custer had to pit under green flag conditions. Reddick won the race while Custer finished 12th and Bell 13th.

“I remember like it was yesterday,” Bell said. “(Ratcliff) said, ‘Lemon-lime,’ and ‘lemon-lime’ on my sheet said pit under green, and we’re under yellow, so I asked him, ‘Are you sure that that’s what you want to do?’ And he said, ‘Yes, absolutely. Lemon-lime.’ So, I stayed out. Well, his sheet said Gatorade flavors was to pit, not pit under green; mine said pit under green and his said pit. We ran out of gas and lost the race.”

Reddick’s crew chief that day was (and still is) Randall Burnett, and when asked about that race and the manner in which he won it, he rolled his head back and laughed.

“My code for pitting is ‘pit,’” he said. “The last thing I need is to screw it up some other way. Just to keep it simple.”

Said Reddick: “Randall and I have never done code words, (and Michigan) is a good reason not to, I guess. … It’s one more thing that can just be a variable that can screw your day up. And it’s easy enough to screw your day up as it is, and code words make it a lot easier.”

Burnett’s No. 8 Richard Childress Racing team is not the only team that doesn’t disguise its intentions when it comes to pit strategy. Also in this camp is Kevin Harvick and his No. 4 Stewart-Haas Racing team.

“I’ve always been a firm believer of just keeping it simple,” Harvick said. “Just because of the fact that everybody’s got their own things and if they’re dependent upon your strategy to make their strategy, they’re already one step behind anyway.”

Of course, even when teams elect not to use subterfuge, the competition can’t help but think not everything is on the up-and-up.

“Give everybody everything they asked for because they won’t believe it anyway,” Harvick said. “So just talk about what you talk about, and you know half the time they’ll question whether they believe it or not.”