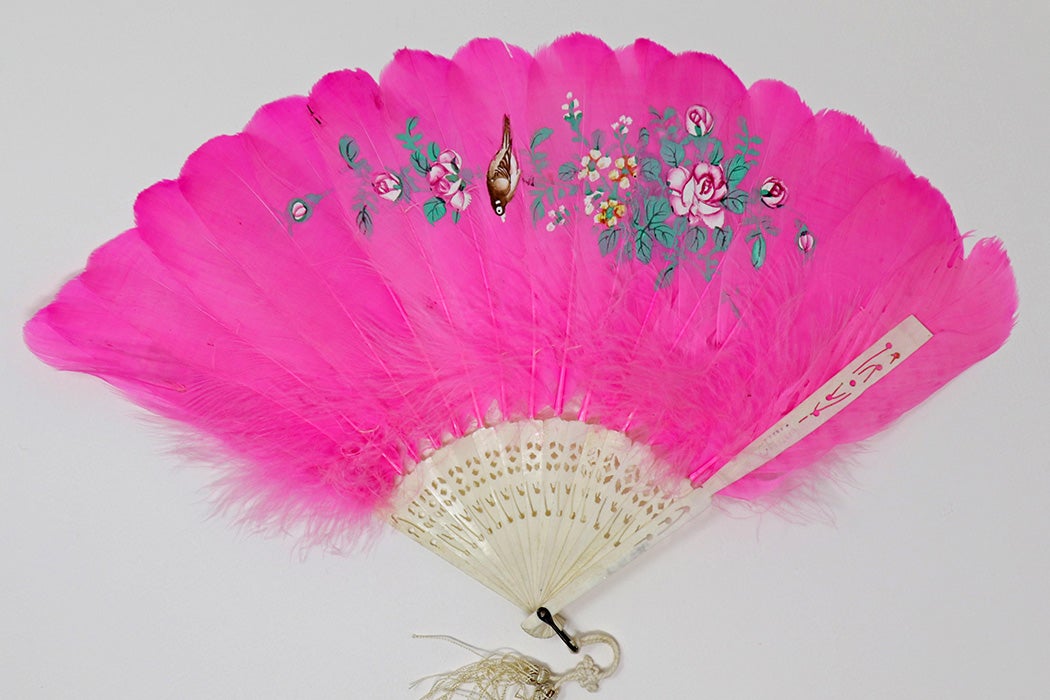 If you’re stuck in a building without air conditioning or in a crowded outdoor stadium this summer, you might welcome a breeze from a handheld fan. Maybe any old piece of cardboard would do, but, as a 2004 traveling exhibit at the Wisconsin Historical Museum made clear, historically, fans have meant much more than just a waft of fresh air, serving as fashion statements, status symbols, and political advertisements.

Until Portuguese traders brought folding fans to the continent, Europeans used flat ones.

According to museum curator Leslie Bellais, the folding fan was probably invented in Japan in the seventh century, but Europeans didn’t learn about it until the sixteenth century. Until Portuguese traders brought folding fans to the continent, Europeans used flat ones. The style of the day called for for heavy and tight-fitting clothes, which made staying cool a major task. The most fashionable elites soon began carrying expensive folding fans made from precious materials, decorated with jewels and sequins, and painted with intricate designs.

These fancy fans fell out of favor at the end of the eighteenth century, when women began wearing loose Empire gowns, which were deemed incompatible with the accessory. But in the early Victorian era, tighter clothes, fuller skirts, and heavier materials made a comeback, not just in Europe but in much of the US, including among the European settlers moving en masse into Wisconsin. Fans came with them.

In that industrialized age, Bellais writes, lithography and other advances in mass production, such as machinery that cut and pierced the many sticks that supported the folding fan, brought decorative printed fans to a broader customer base. At the same time, wealthy American women could show off with handmade fans imported from Europe.

Fancy fans remained in use into the twentieth century, frequently paired with evening wear. A popular style from the 1860s featured ostrich feathers dyed to match a dress; by the 1920s, these were the only fans still in widespread use.

But other fans still popped up as quirky accessories. For instance, a 1893 novelty cockade fan was made to look like a cigar that slid open to reveal a fan printed with an American flag design. Political campaigners apparently handed them out to women while giving real cigars to men. Another fan, made in the late 1890s by a Madison, Wisconsin, teenager named Julia Morris Jackson, began with a plain Japanese fan. At a scrapbooking party, she pasted photographs and courtship advice cut from newspapers and magazines onto the blank paper, creating a personalized cooling system.

By the 1930s, fashionable women were more likely to be found with a cigarette or cocktail in hand rather than a fan. But the decline of ornamental fans coincided with a rise in simple cardstock versions used as a form of inexpensive advertising for businesses and politicians. Until the advent of air-conditioning, these were everywhere, marked with almost every brand imaginable.

The ubiquity of these simple paper fans didn’t stop people from making their own, of course. In the 1970s, an enterprising soul folded and wrapped the upper half of the sports section with a paper band that featured a photograph of Richard and Pat Nixon to create “The Dick & Pat Fly-Swatter and Fan.” Even if jewels and ostrich feathers aren’t in your budget, the homemade, dual-purpose fan-and-fly-swatter is the just sort of thing you could make to keep yourself cool today.

JSTOR is a digital library for scholars, researchers, and students. JSTOR Daily readers can access the original research behind our articles for free on JSTOR.

The Tesla SpaceX Hypercar with SpaceX boosters will blow your mind

The Tesla SpaceX Hypercar with SpaceX boosters will blow your mind